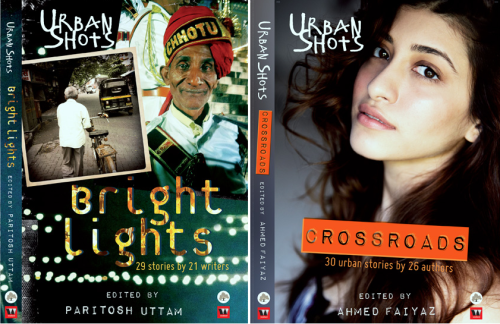 Friday, 20th January, 2012
Landmark, Pune:
I was recently invited to the book launch of two of the most awaited anthologies –  Urban Shots Crossroads and Urban Shots Brightlights.

I walked in to the store, towards the book launch area, recognizing a few familiar faces, and smiling at the new ones.
I could sense the excitement. It reminded me of the launch of the first Urban Shots anthology by Grey Oaks and the launch of Down the Road that followed about a few months thereafter.

The evening began with the screening of a short film, based on a short story written by Paritosh Uttam– Between Friends.
After the screening, the contributors of Urban Shots Brightlights took their seat to address the audience. The panel saw (R-L) Jehangir Kerawala, Dr. Roshan Radhakrishnan, Paritosh Uttam and Ahmed Faiyaz, in conversation with Lipi Mehta.
Sharing a few anecdotes and their experience of contributing to the anthology, the writers briefed the audience about the stories they have penned.
The second part of the session saw the launch of Urban Shots Crossroads. On the panel were popular bloggers and contributing writers –(L-R) Rohini Kejriwal, Pranav Mukul, Malcolm Carvalho, Anita Satyajit, Rohan Swamy and Avani Rajesh.
They too shared their thoughts on their stories and the experience of being associated with the Urban Shots series.

The stories in both the books are quite racy, compelling and heart rending. Certainly worth reading/reviewing.

Down the Road is the latest anthology from Grey Oak Publishers, a book with 28 short stories about those unforgettable, warm, thrilling, and at times embarrassing memories of life in school and college campuses.

Helter Skelter is running a contest for the same.

Give it a try. You could win a copy of Down The Road!

Book Review of “Down The Road” by Grey Oak Publishers

Urban Shots set the ball rolling for Grey Oak Publishers I feel – in the shot story segment – especially in and for the Indian society.

Urban Shots was a major success and rightly so. And Down The Road is a good follow up.

Focusing on the main theme of campus fiction, the book has 28 short stories, contributed by 16 authors, edited by Ahmed Faiyaz and Rohini Kejriwal. All 28 short stories revolve around growing up years in schools, colleges, universities and also forays into adulthood.

Ahmed Faiyaz has contributed 9 stories, Rohini wrote 2, just like Ira Trivedi, Sneh Thakur, Paritosh Uttam and Malathi Jaikumar. The rest 10 authors have one story each. And they span the entire canvas of growing up years –from being in school, getting suspended for making trouble, harassing the teacher/professor, falling in love, falling in love with the teacher/professor, arranging illegal parties in hostel rooms, bunking college, getting ragged, falling in love, getting your heart broken, procuring a good placement, hanging out with friends, politics in college life, friendship, growing up, saying good-bye…oh the moments are unique and countless!

It’s a wonder how all the stories bring back a certain part of life we’ve lived carelessly. Looking back, those moments seem more loved than present life- thanks to Down The Road.

Quite a few contributing authors are first timers while most have shared and basked in the glory of Urban Shots.

Yes this one indeed is an exciting and eclectic collection of short stories that brings out all those memories – unforgettable, warm, thrilling, and at times embarrassing – of life in school and college campuses. High on emotions and sensitivity, all the authors have portrayed different styles, ideas and narration techniques.

My personal favorites include:

*The Music Room by Ira Trivedi – the emotions portrayed touch your heart.

*Welcome to St. Gibbs by Ahmed Faiyaz – a very relatable story, for most guys I’m sure!

*That’s It? by Sahil Khan – the thing about his stories is that they might not be as unique overall – but the endings – boy! Does he nail it or what! It’s usually the last para or the last line of his story that makes it shine. And leaves behind a smile.

*Call me biased but I do like Paritosh Uttam’s stories. Sororicide and Between Friends both of them are well crafted.

*An Accidental Start by Kunal Dhabalia has a wonderful concept and it instills the idea of reading and writing in us.

*Just A Moment by Nikhil Rajagopalan is very realistic.

*Remember Me? by Ahmed Faiyaz again is a good one.

Then of course are the articles and essays that paint features of campus life in our lives.

Wait…am I almost jotting down all of them?!

Sorry. Can’t help it – they all are fantastic and readable.

This definitely goes up in my bookshelf along with Urban Shots – which can be read over and over again without losing any bit of their luster.

So for kids in schools / colleges and even us – workaholics who sometimes are unable to spare a moment from our busy lives to reminisce the ‘good old days’, Down The Road urges you to take a while off and bring back memories to cherish forever.

Enjoy it and treasure it.

Book Launch -Down The Road by Grey Oak Publications

The road blocks (literally!), due to Ambedkar Jayanti celebrations did not deter book enthusiasts from attending the book launch of Grey Oak Publishers’ new offering – Down The Road. An electic anthology of 28 campus tales by 16 authors brings back unforgettable memories of life in the campus. We all have had our share of school and college incidents that bring out emotions and feelings attached to the carefree life we truly miss now. And reviving those memories for the audience at Landmark, were the people who made the book a success.
On the panel were – Ahmed Faiyaz, Sahil Khan, Paritosh Uttam, Rohini Kejriwal, Naman Saraiyawith me moderating the discussion. After a crisp introduction of the authors and the editors what followed was a lively dialogue with the famous five (as they would be known by now).

The evening opened with a conversation with Ahmed Faiyaz – a renowned author with two popular bestsellers to his credit – Love, Life and All That Jazz and Another Chance; and of course memorable short stories contributed to Urban Shots.

On being asked about the selection of the title, Ahmed spoke about how an online poll was conducted with a few options competing for the title position and how the most voted title was finally chosen.

“Short stories are easier to write as well as read. When we were compiling stories for Urban Shots we had a few stories set in the campus life. So we thought of compiling just such stories that brings back memories of campus life,” smiled Ahmed on being asked about the ideation of compiling short stories.

Paritosh Uttam, Pune based software engineer and the prolific author of Dreams in Prussian Blue as well as the editor of Urban Shots (and of course one of the authors of the anthology), spoke about his two short stories featuring in Down The Road. “One of them is entirely fictional and the other one is written from personal experience, but I won’t tell you which one that is,” blushed the soft spoken author.

Sharing her experience of co-editing the collection was Rohini Kerjriwal, a 19…ooppss 20 year old PYT. “Grey Oaks has been kind to give me an opportunity to co-edit the stories. It really has been a wonderful journey.”
Naman Saraiya gathered most accolades from the audience, which of course comprised more girls. Need we get into details – nahh! We’ll let Naman’s “love” stories do the talking. His story, he said, is based on a friend’s encounters. Well captured and brilliantly put.

And of course, Sahil Khan – a lifestyle activist, a hard-core foodie (don’t be fooled by his skinny appearance and innocent looks), and one of the Young Turks of Pune, shared his experience of writing his short story “That’s It?”

Reminiscing about their campus life, the panelists shared a few experiences of their “good old days” and gathered a few laughs, trying to take a dig at each other.

“Down The Road is sure to connect with each reader- be it an adult or a youngster. The entire collection brings out feelings and incidents that readers must’ve experienced at some point in their life,” affirmed Rohini and Ahmed as they spoke about the USP of the book.
Wondering about what’s next in line from the desk of these brilliant writers -this is what we found out.

Ahmed has his hands full -scripting “Another Chance” (for hopefully a movie tie-up) and working on another novel; not to forget, the next Urban Shots anthology – a “Love” collection.
Paritosh too is working on his novel which possibly would be out this year. He is also contributing to Urban Shots Love Collection.
Rohini, Naman and Sahil would definitely continue working together for TossedSalad.com as well as for Urban Shots further anthologies. We sure hope Sahil keeps his commitment to delivering a full fledged novel soon.

The evening ended with a quick book-signing session by all present on the panel and the crowd hung around for quite a while, talking to the authors.

All said and done, Down The Road is sure to strike a memorable chord in your heart. All you have to do is -read it!

Though all the short stories in here are brilliant, my preference would be:

Down The Road – By Ahmed Faiyaz

Rishi & Me – By Ira Trivedi

One Bump Does No Harm – By Naman Saraiya

That’s It – By Sahil Khan

The Cafe With No Name – By Sneh Thakur

The Worm That Turned – By Malathi Jaikumar

Growing Up – By Rohini Kejriwal

But most importantly – go pick up Down The Road and revive your campus days memories. This one is sure to “rock”!

Oh and do not miss my essay on Page 209 – Fiction on Campus. This marks my debut as a contributing writer.